Why Should We Dump Java EE Standard?

I never thought that I have to write about this topic again, but I have to since a couple months ago I have to justify a decision of using Spring Framework in an enterprise environment. The decision to be made was whether we are going for Java EE or using Spring Framework. The constraint was very clear:
Still there was such a quarrel in the team because there are already some Java EE web apps run in OAS upgraded with JBoss Weld CDI 1.0. Normally JBoss Weld 1.0 won't run out of the box in OAS but with some patches we got it run. The problem with all those web apps is we had a lot of our own CDI extensions to fulfill enterprise features (declarative transaction management for services, caching, security) which already a part of Spring Framework a long time ago.

So it's time to google this topic "Java EE vs. Spring Framework" to see whether the dispute between them still exists.

I found in Google a lot of Spring Framework bashing in years 2012 and 2013. There are some of blogs and articles saying that with the existence of Java EE - especially Java EE 7 - we don't need or should avoid Spring Framework. One of the most controversial article is this one: Why is Java EE 6 better than Spring? Luckily there are also some counter parts like this one: Java EE a tough sell for Spring framework users and this one Java EE vs Spring. Or: What is a standard?

So the topic is still hot!

Base on these discussions I need to make my own picture so let's get the two important aspects of enterprise application development: programming models and runtime environments.

Following enterprise application types should be supported from both stacks Java EE and Spring Framework:
At last Java EE 7 supports both application types. Although the support of batch apps is still very young you should be able to define centralized business logic and can use it in both web and batch apps. The biggest problem I see with Java EE 7 so far are:

So in 2014 if you ever need to start an enterprise project what kind of enterprise platform will you use? If you want to write easy, secure enterprise apps (web and batch) with a single Java programming model which can be executed in many runtime environments, Spring Framework is still the one and only one choice you have.

The Problem with Java EE and My Solution: "One Runtime Environment with Standardized APIs and Simple Implementation Dependencies"

The idea to standardize some mechanisms using Java API is fine. It is good to standardize persistent mechanism with JPA, it is good to standardize dependency injection with CDI, messaging with JMS, Batch programming model with JSR-352 and others. What we don't need is the umbrella standard Java EE which puts a lot of those APIs together. Take a look at this page to see the content of Java EE. So what do we actually need?
That's it! No need to have those Java EE runtime environments like JBoss, Weblogic or Websphere. Of course they can still bundle all those frameworks together like what they already have done today but the most important point is actually that you can mix and match the implementations with different specification versions. Today it is impossible to do so. If you have a Java EE application server which supports Java EE 1.4 it is almost impossible to use JPA 2.1.

Also if you have a lot of web and batch apps in production you cannot update all of them at once. Update has to be planned carefully. If you have Java EE 1.4 container in production you will stick to it in long term, since your traditional operation won't accept if you want to use different kind of containers for example Java EE 1.4 and Java EE 7 in production. If you want to move to a new Java EE 7 container you need to migrate all of your web apps at once and this is in a normal enterprise situation almost impossible. You can only update a web app within a project and you have limited resources to execute your project. So to use just a simple container and put all the implementation dependencies in the web app is the way to go. In this case you can use up-to-date APIs in some web apps. You don't need to update all the web apps just to be able to use up-to-date APIs in some new web apps.

To conclude: the umbrella Java EE specification which contains all those APIs also makes everything more complex and makes update to a newer version of APIs very slow.

Spring Framework supports the idea of one runtime environment and mix and match APIs since the beginning:
So the ideal situation would look like this picture below: 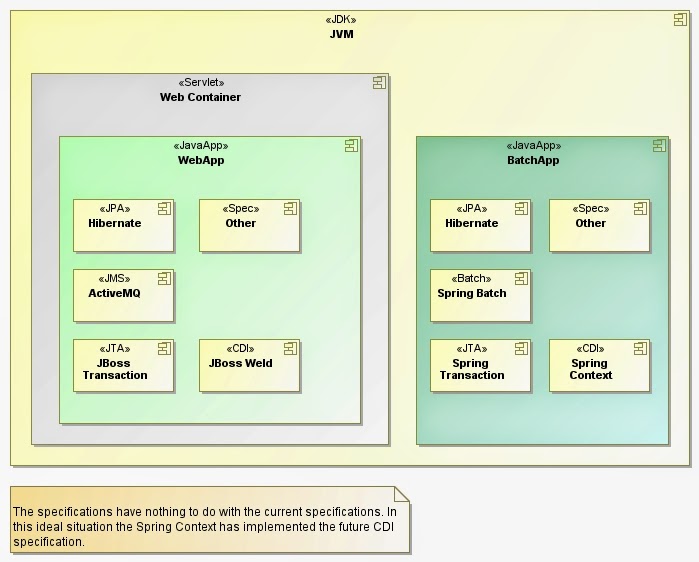 In my opinion the enterprise development in Java has to go in the direction above:
So at the end as an end user we have one and only one runtime environment (container). The rest is just standardized APIs (JPA, JMS, CDI, Batch, Security) with their implementations (Hibernate, ActiveMQ, Spring DI, JBoss Weld, Spring Batch, Spring Security) which can be used mixed and matched as you need them. With this style you can update the version of particular specification without having to update the whole runtime environment and all the APIs in one step. A new developed app can use the up-to-date APIs and their implementations. Update of older web and batch apps can be planned carefully without the need to update all the apps at once.

At the end we chose Spring Framework. We will use all available standardized APIs with the best implementations we can get. To be able to mix and match the version of APIs in each web and batch app we will manage the dependencies within the apps itself using standardize Java mechanism.

Unknown said…
Such a interesting blog to discussing about the Java EE and its principle, working process.I hope this is the best post to get the details about it.
Web Design Companies | Web Development Companies
10:52 PM

Prasanth said…
A very well-written post. I read and liked the post and have also bookmarked you. All the best for future endeavors. Getting some solution regarding.
UI Designing Companies in Bangalore, Web Application Development Services in Bangalore

Unknown said…
All collective information are really useful you have good matter about this topic, Thank u so much. medical tourism in india
3:26 AM

Suruchi Pandey said…
Thank you for listing your services here. They might be useful for many seekers, who are after learning php and java.Professional Web design services are provided by W3BMINDS- Website designer in Lucknow.
Web development Company | Web design company