I was lucky that my daughter asked me whether I would answer all the questions of her classmates - most of them are nine years old - about my profession. They had "professions" as the topic of their general knowledge lesson. So my daughter told me that they invited teacher, school caretaker, stewardess, nurse and also me software developer. Her classmates and she would ask the invited person some questions. I directly said yes because I think that the new generation needs to be introduced in software stuff especially that the current professions will change a lot in the near future. Reuters had a very interesting article about how Robots and Artificial Intellegence will cost five millions jobs by 2020. In my opinion software development will be much more important by 2020, so this is my chance to introduce my profession to the kids in my daughter's class.

In my preparation I thought that I need to show them something cool so I began to google and found this piece of IDE (Integrated Development Environment). Scratch is a great IDE for doing graphical programming language. With Scratch you can show your kids how to write a program in a simple manner. You also can find a tablet version called ScratchJr. 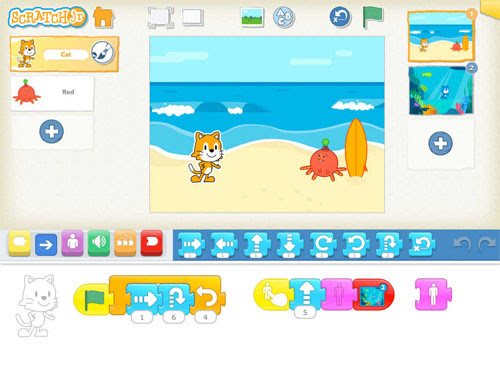 I myself really had a fun with this IDE. Now I need two things to be able to run my introduction.

(1) Content of my presentation: I need to prepare my presentation so that all the kids will understand me. For this purpose I'm lucky to have my wife as a primary school teacher. So I asked her how I could show them Scratch in an easy manner so they understand what software developer is doing the whole day. She told me that I have to involve them and create something cool. I also need to think about what are the requirements to become a good software developer. We took a look at Scratch and I should involve them in some these things:
Afterwards we declare what the requirements are to become a good software developer:
That's it! Now I need to go to the next preparation point.

(2) Technical possibilities in the classroom: to be able to show ScratchJr and programming in the classroom I need to prepare some technical things. It is a pitty that in the classroom there is no projector so I need to bring all the things by myself. Generally speaking, computer equipments (tablets, internet and projector) in primary schools in Germany look really horrible. In 2014 only six percent of primary schools in Germany has a tablet equipment in their classroom. Following gadgets will help me a lot:
Here is how my technical setup looks like: 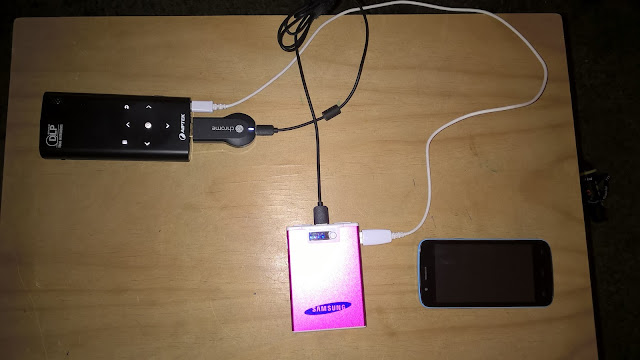 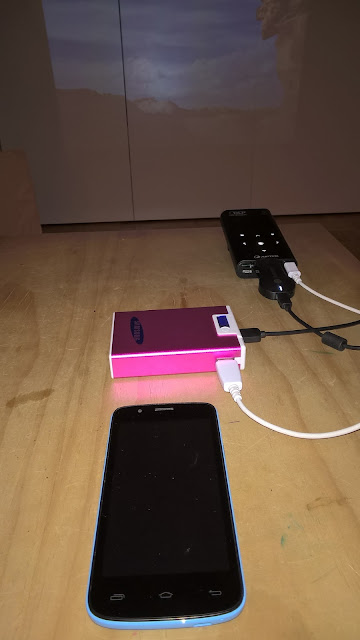 At the end of the day I'm prepared with the content and the gadgets so I was really looking forward to show this to my daughter's class.

At the D-Day I was well prepared, every single gadgets was fully charged, as I know, without power supply I need to be secure that all the gadgets can work independently from the power supply. I also need to put my mobile in the near of the classroom's window to get a good internet connection. I also need helps from the kids to get some books to put the projector on the top of them, so that it can show the ScratchJr user interface just in the middle of their blackboard.

After showing them the ScratchJr and let them decide some things as I planned above, I got an interview round, so they could ask me all their questions about the profession as a software developer. Here are some questions:

I had a lot of fun showing ScratchJr and answering all the questions for about 45 minutes.

At the end, I think, I managed to excite the kids to see how easy graphical programming could be. ScratchJr or Scratch is the best IDE I found sofar for this purpose. It is quite similar to Android App Inventor which is designed for Android application development with graphical programming language. Google Chromecast and Pico projector help me a lot to tackle the infrastructure in the classroom. Without a demonstration with ScratchJr I won't be able to explain what a software developer is actually doing the whole day. At the end of this story I want to encourage all fathers and mothers who are software developers to show your children and their classmates that writing software is really cool! As Marc Andreessen said "software is eating the world", so we need more intelligent software developers!

Unknown said…
Very cool idea and good team work with ur wife :-)
i'll definitely show my daughter.
Education is the most important thing after health. You can change the world by it.
Thanks for sharing & do some more:-)
4:54 PM

lofidewanto said…
Thanks for your positive reply. Yes, we have to think and act for the next generation!
3:39 AM

srinivas said…
Really this is a great post,Thanks for sharing the information.

Ena said…
Developer mother here! This is just what I'm planning to do next month with my child classroom.. except they are 4 years old :D Your article was a big help! Thanks!
12:18 PM